Why I am Not Changing my Profile Picture to #IAmAChristian

Why I am Not Changing my Profile Picture to #IAmAChristian

0
#IAmAChristian,Why I am not
Blog

I understand many Christians have been making a profile picture switch to this photo: 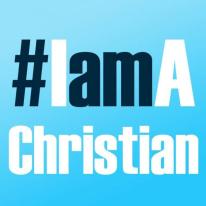 This is in reaction to a shooting in Oregon in which students were held at gun point and asked to state their religion. If they answered “Christian” they were shot in the head. If they had a different answer they were shot in the leg. Originally I was going to link to an article for your perusal. However, after a quick Google search and seeing the plethora of articles and sources, I’ll let you handle further research.

Although I am a Christian and I pray I will be bold enough to proclaim it if ever faced with a similar situation, I will not be changing my profile picture. I am not writing this post to start any arguments, nor am I writing it to shame those who have changed their photo. I merely write to express my concerns and to challenge my fellow followers of Christ to not settle for a social media trend when faced with an opportunity to proclaim Jesus as their Savior.

To bear the name of Christ is not merely a label or hashtag, it is an honor and responsibility. If you follow Jesus, He is Lord of your life. King. From the moment you bow down to him you live to serve him. This requires more than a photo when your brothers and sisters are slaughtered for declaring the name of your King.

“What good is it, my brothers and sisters, if someone claims to have faith but has no deeds? Can such faith save them? Suppose a brother or a sister is without clothes and daily food. If one of you says to them, ‘Go in peace; keep warm and well fed,’ but does nothing about their physical needs, what good is it? In the same way, faith by itself, if it is not accompanied by action, is dead (James 2:14-17, NIV).” If you want to declare you are a Christian online, there is nothing wrong with that. But what comes next? James also says, “Do not merely listen to the word, and so deceive yourselves. Do what it says (James 1:22).” What action will you take now that the world has seen your post, honed in on you, and is waiting for your next move?

Please don’t misunderstand me, Jesus said, “Be careful not to practice your righteousness in front of others to be seen by them. If you do, you will have no reward from your father in heaven. So when you give to the needy, do not announce it with trumpets, as the hypocrites do in the synagogues and on the streets, to be honored by others. Truly I tell you, They have received their reward in full. But when you give to the needy, do not let your left hand know what your right hand is doing, so that your giving may be in secret. Then your Father, who sees what is done in secret, will reward you (Matthew 6:1-4, NIV).” If we are responding with action to this incident in Oregon, why do we need a photo to tell the world? All too often people build a false image of themselves online. Does your online self reflect who you are every day? If you are willing to tell the internet you are a Christian, are you willing to invite your neighbor to church?

Many times before, people have hashed out their battles over social media. They have used their photos as flags to show the side they have picked. Equality. Gay Marriage. Confederate. They have entered into Mommy Wars and the fierce battles of politics. Christians go head to head with athiests. Adults battle teens over anything and everything. “No more!” I say! We are followers of Christ, standing for something different! Our battles are not meant to be fought over social media but on our knees! “For our struggle is not against flesh and blood, but against the rulers, against the authorities, against the powers of this dark world and against the spiritual forces of evil in the heavenly realms (Ephesians 6:12, NIV).” I have a feeling several people reading this have seen the movie War Room and have either set up their own prayer room, or plan to in the not too distant future. Use it! Pray for this situation, pray for the families, all those involved, pray for Christ’s name to be known, and that if the time ever comes, that you will have the boldness to stand before a bullet and proclaim the truth!

Jesus tells us, “You are the light of the world. A town built on a hill cannot be hidden. Neither do people light a lamp and put it under a bowl. Instead they put it on its stand, and it gives light to everyone in the house. In the same way, let your light shine before others, that they may see your good deeds and glorify your Father in heaven.” (Matthew 5:14-16, NIV). We have a mission- shine! This won’t happen by just changing our profile pictures according to the current trend. We shine by choosing actions that show Christ working in our hearts and in our lives. By being open about our struggles and sharing what we are praying for. By serving those around us as Christ served his apostles. By praising God in the good times and bad. Why? So that when those prayers are answered, when they ask why we serve, when our praises reach their ears; the light falls on our King. The goal isn’t for the world to see us, but to see him. The world knows our religion. It needs to see our King!